What: Interrupting the Toronto Luncheon of Michelle Bachelet, President of the Republic of Chile

Who: The Women’s Coordinating Committee for a Free Wallmapu [Toronto] and allies. Photo credit to q_e_d

Why: We are a  group of indigenous Mapuche women and allies who have interrupted the Toronto visit of Chilean President Michelle Bachelet in protest of the continuous incarceration, plunder and displacement of indigenous Mapuche land defenders originating from so-called southern Chile. In particular, we stand in solidarity with Mapuche Medicine Healers Machi Celestino Cordova and Francisca Linconao who have recently been charged under Anti-terrorist legislation, the former convicted to 18 years in prison and the latter whose process is currently ongoing, with the International Federation of Human Rights calling for their release. These are only two of the many dozens, if not hundreds, of Mapuche organizers exclusively processed by the Anti-Terrorist law since 2001 – a law which was legislated during the Pinochet military dictatorship in 1984, and which has been internationally condemned by the Inter American Court in 2014. The ongoing criminalization, and militarized repression of indigenous Mapuche movements in Chile have resulted in the police shooting deaths of several Mapuche youth, including 22 year old Matias Catrileo in 2008 during Bachelet’s first Presidency, whose families have yet to find justice.

We also protest the actions of the Canadian government in continuing their relationship of trade and commerce with Chile, strengthening the extractive industries that have caused the plunder and displacement of our indigenous peoples respectively. These actions are shameful but unsurprising, given both country’s colonial history. We stand in solidarity with our Mapuche political prisoners and their communities in resistance, as well as local indigenous communities who are also facing displacement as a result of neo-liberal, neo-colonial policies reinforced by each of these states. Free our Mapuche Political Prisoners! WEUWAIN! MARRICHIWEU! #NoCanada150 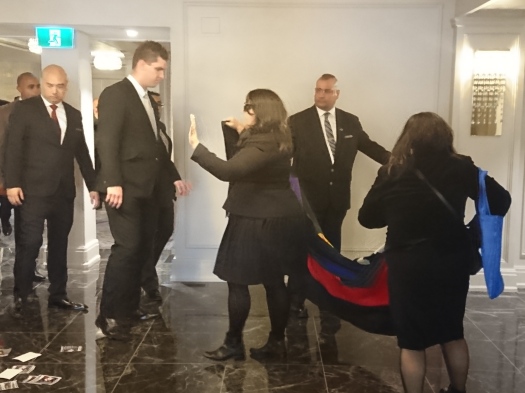