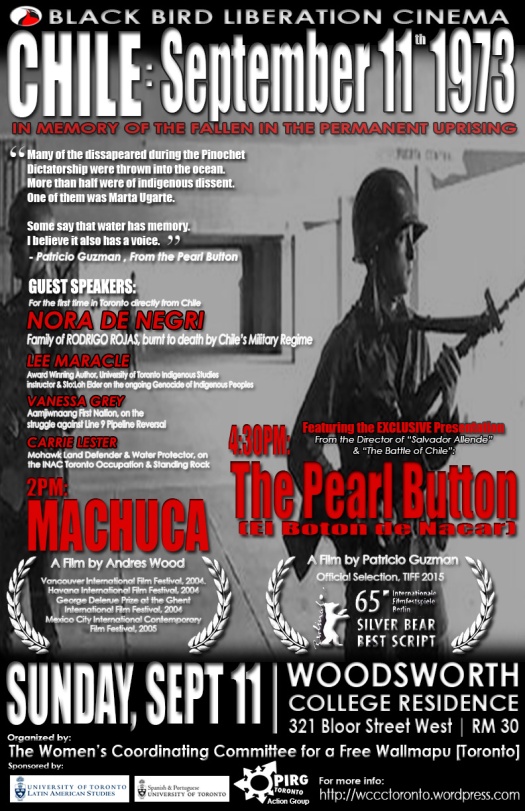 Black Bird Liberation Cinema presents this year’s film series commemorating the 43rd Anniversary of the Bloody Coup D’état in Chile, bringing about the 17-year fascist dictatorship of Augusto Pinochet. The films document the process(es) of Popular Power, and State repression before and after the Coup.

IN MEMORY OF THE FALLEN IN THIS PERMANENT UPRISING

“Many of the disappeared during the Pinochet dictatorship were thrown into the ocean. [More than half were of indigenous dissent.] One of them was Marta Ugarte.

Some say that water has memory. I believe it also has a voice.”

– Patricio Guzman, From The Pearl Button

*Directly from Chile & For the First Time in Toronto*

Family of RODRIGO ROJAS, burnt to death by the Pinochet Military Dictatorship in 1986

30 years after the murder of Rodrigo Rojas De Negri, burnt to death by the Pinochet Military Dictatorship, WCCC will be honored to host NORA DE NEGRI speak on her nephew’s case, which remains unpunished to this day.

Award Winning Author, University of Toronto Indigenous Studies instructor and Sto:Loh elder, Lee Maracle will be to speaking on the ongoing plunder and genocide of indigenous peoples of Turtle Island.  Her works include: the novels, Ravensong, Bobbi Lee, Sundogs, short story collection, Sojourner’s Truth, poetry collection, Bentbox, and non-fiction work I Am Woman. She is Co-editor of My Home As I Remember and Telling It: Women and Language Across Cultures, editor of a number of poetry works, Gatherings journals and has published in dozens of anthologies across Turtle Island.

From Aamjiwnaang First Nation, Land Defender and Water Protector to speak on the ongoing struggle against the Line 9 pipeline reversal carrying Tar Sand Oil from Alberta to the East Coast.

Organized by: The Women’s Coordinating Committee for a Free Wallmapu [Toronto] (An OPIRG Toronto Action Group)

Sponsored by: The Latin American Studies Department at the University of Toronto

Department of Spanish and Portuguese at the University of Toronto

Endorsed by: The Organization of Latin American Students (U of T)

***All Films in Spanish with English Subtitles***

Santiago, Chile, 1973: A must see timeless classic on the friendship between two boys at a Santiago private school from different class backgrounds, which become a microcosm for the developing class war beyond the institution’s walls. All around them, Chile drifts towards civil war. The enormous rift between them ultimately becomes impossible to bridge, once the bloody military coup of September 11, 1973, as they face a reality far beyond their young capacities

From the director of The Battle of Chile, The Obstinate Memory and Salvador Allende, Patricio Guzman delivers yet another masterful piece connecting the issues of colonialism and state repression since Chile’s inception. The ocean contains the history of all humanity. The sea holds the voices of the Earth and those that come from outer space. Water receives impetus from the stars and transmits it to living creatures. Water, the longest border in Chile, also holds the secret of a mysterious button that was discovered in its seabed. Chile, with its 2,670 miles of coastline, the largest archipelago in the world,presents a supernatural landscape. In it are volcanoes, mountains and glaciers. In it are the voices of the Patagonian indigenous people, of the first English sailors and also those of its political prisoners. More than half of all of Chile’s missing and murdered political prisoners during Pinochet’s military dictatorship were of indigenous decent. Many still dumped in the ocean. Some say that water has memory. This film shows that it also has a voice.

For more information, check out https://wccctoronto.wordpress.com